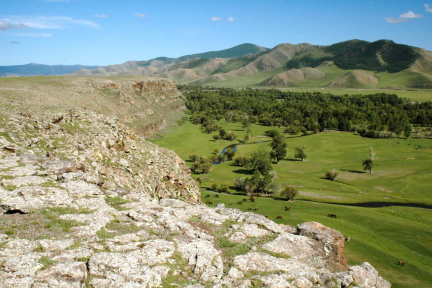 The goal of the geomorphology and landscape evolution component to the NSF Continental Dynamics’ Hangay dome project is to investigate and provide insight into the Earth surface response to long-wavelength dynamic (mantle involved) uplift in central Mongolia. We are seeking answers to the patterns of uplift, incision, and landscape evolution as well as the magnitude of neotectonic activity on the small normal faults that are present in the Hangay dome.

Drainage Divide Mobility: In tectonically active areas, topography and drainage divides are mobile elements of the landscape capable of migrating tens of kilometers on 105 to 106-yr time scales. Over geologic time the position of regional-scale drainage divides are sensitive to crustal deformation and uplift of rocks, which can be represented by two end- member scenarios. In the first, a divide remains spatially fixed (with respect to an external point of reference – e.g., hotspot reference frame) over long periods of time, during which an overthickened orogenic crustal root is passively consumed via erosional unloading and its isostatic response. Examples of fixed divides include those of great escarpments such as the eastern continental divides of Australia and North America. In the second, divides actively migrate in response to tectonic and dynamic mantle processes. Examples include the axial divide of the Italian Apennines and the topographic and seismic parabola surrounding Yellowstone in western North America. The greater Hangay region may similarly be a place where topography and regional drainage divides are actively migrating in response to tectonic and dynamic mantle processes.

Estimates of Rock Uplift from Fluvial Incision: Changes in surface elevation reflect the combined effects of tectonics, erosion, and the isostatic response to erosion. We are utilizing inset topographic relationships from dated valley-filling basalt flows to measure Miocene-to-Holocene fluvial incision rates around the perimeter of the Hangay Dome. Basalt flows are now preserved on valley margins and interfluves – stranded as the rivers they once displaced incised into the adjacent country rock. We interpret the amount of river incision beneath basalt flows in terms of rock uplift rates, a common approach in tectonically active areas. The broad temporal distribution of the valley-filling basalt flows provide a rare opportunity to measure rates of river incision beyond the time span of one-to-two glacial – interglacial cycles typical for most river incision studies utilizing climatically-modulated fluvial terraces. These incision rates will provide contextual information about the spatial and temporal pace of late Cenozoic regional uplift along the flanks of the dome and will be directly comparable to the longer-term low-temperature thermochronometric rock exhumation (U-Th/He and 4He/3He) and bedrock erosion (10Be) data sets that will be generated by our study. 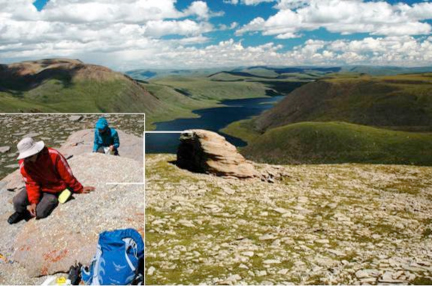 In complement to rates of rock uplift derived from fluvial incision and exhumation from low-temperature thermochronology we will use cosmogenic nuclides to measure rates of erosion within drainage basins draining the Hangay Dome, using well-established techniques. The cosmogenic isotope 10Be accumulates in quartz grains near the ground surface. The exposure time of the quartz to cosmic rays depends on the erosion rate of the bedrock and soil within which it is found, and the method measures erosion rates over the time scale required to erode ~0.5 m of material (bedrock or soil) from the landscape. The accumulated concentrations of 10Be can thus be used to accurately infer rates of catchment-wide average denudation and bedrock erosion from exposed ridges and summit plateaus, thus allowing estimates of relief production (variation between summit and catchment erosion and fluvial incision rates to be determined.

We’ve sampled for 10Be from the active channels of several nested tributary catchments within each of 10 larger basins that drain radially off of the Hangay, selecting an equal number of drainage basins that contain both significant and minimal fractions of basin area above the equilibrium line altitude (ELA) for late Pleistocene glaciers as a means of assessing the relative importance of fluvial vs. glacial-periglacial erosion in this landscape. Our sampling strategy will allow us to ascertain variations in erosion rate with position and dominant erosional process on the dome. 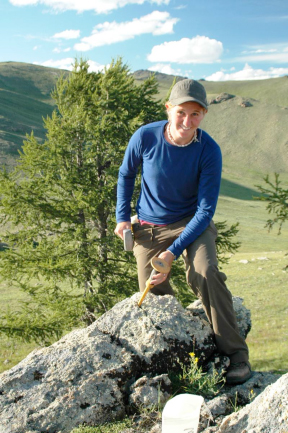 In addition to the catchment-wide 10Be erosion rate estimates, we are also determining summit and ridgeline lowering rates by sampling exposed quartz veins from bedrock features along prominent ridges and summit plateaus. The abundance of 10Be in surface samples will be interpreted as a steady-state erosion rate. Bare-bedrock rates of erosion will be compared to the catchment-averaged denudation estimates and to the rates of valley lowering from fluvial incision through dated basalt flows, providing an estimate of whether topographic relief is increasing or decreasing across the Hangay dome. This information will be useful in assessing the landscape response to mantle-derived uplift, topographic development, and the creation of the continental-scale drainage divide that isolated fish populations between the now internally drained Mongolian Great Depression of Lakes and the Arctic-draining Selenga River basin (see biogeography section).

We are using vesicular basalt paleoaltimetry (VBP) as one of two independent approaches to determine the timing and extent of uplift and tilting of the Hangay Dome. In the case of the Hangay region, the VBP method appears promising given the extensive basalt flows found across a wide range of elevations. The VBP method involves measuring the modal bubble volumes at the top and bottom of a vesicular flow. Because the flow top experiences only atmospheric pressure, while at the base there is an additional “lavastatic” pressure, the bubble volume distribution should be smaller at the base than at the top. Consequently, it is possible to obtain a unique solution for the paleo-atmospheric pressure given knowledge of the flow density and its thickness. Elevation at the time of eruption and quenching can, in turn, be derived from pressure using standard pressure-elevation relations. The method works best for basaltic flows, which are usually thin enough (1 to 5 m) to develop optimal vesicle-size differences between top and bottom.

Stable-isotope paleoaltimetry provides as an independent means to constrain the timing of surface uplift. This method requires well-dated stratigraphic sections, suitable mineral proxies for reconstructing past ∂18O and/or ∂D of surface waters, and an isotopic gradient with elevation that can be exploited. All three of these conditions are met in the Hangay Dome area. We are targeting well-dated basalts occurring at the top of the Hangay Dome and the rare but present intercalated sediments found between these basalts as well as the intermontane basinal sediments that lie both to the north and the south of the Hangay Dome. 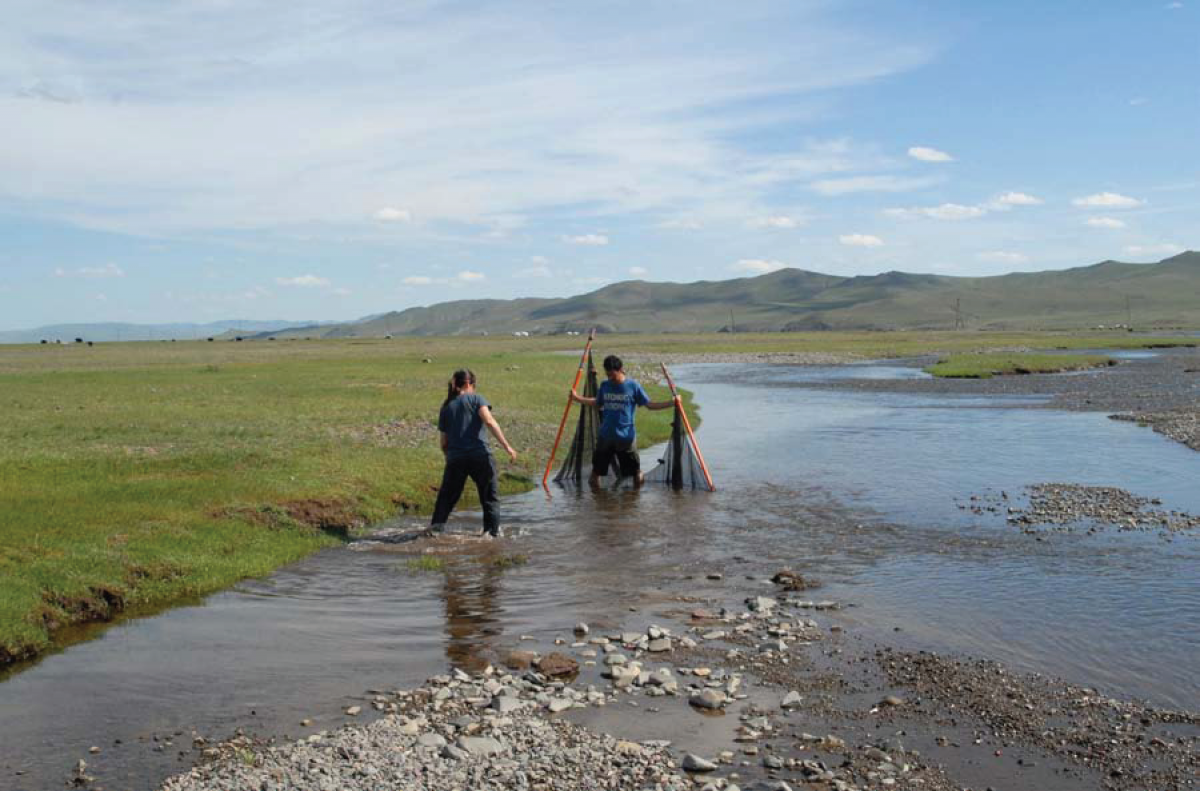 Molecular genetics is an emerging tool in the Earth Sciences for constraining the timing and pace of Cenozoic tectonic and landscape evolution. The existence of Mongolian grayling (Thymallus brevirostris, a morphologically distinct species of fish in the Mongolian Depression of Lakes, is taken as evidence that this freshwater genus, common to circum-Arctic Ocean rivers, must have split into geographically isolated populations when outflow from the Mongolian Depression of Lakes (MDL) ceased. We are utilizing geographical information encoded in the DNA of Thymallus fishes to determine the timing of population isolation and speciation from a common ancestor. We are uisng samples (non-lethal) from Thymallus located in the rivers draining into the MDL (T. brevirostris), Lake Khovsgol (T. nigrescens), and Selenga River basin (T. arcticus). Phylogenetic and distance analysis of these species will provide an alternative, independent timing estimate for the establishment of the present continental drainage divide that we hypothesize formed in response to epeirogenic uplift of the Hangay.