Results from global tomography consistently reveal a low velocity zone in the upper mantle at depths between 100 to 200 km in Central Mongolia. The lateral and depth extent of this anomaly is not well resolved and varies between studies. The 2003 Mongolia-Baikal Lithosphere (MOBAL) transect consisted of 18 broadband seismic stations deployed along a linear 1000 km long north-south transect extending from the Siberian platform to the Gobi-Altai range. The transect glances the eastern edge of the Hangay Dome. Single station SV receiver functions show strong azimuthal dependence, alternating high- and low-velocity layers in the crust, and gradual thickening of the crust from 35 km beneath the Siberian craton to 60 km beneath the Hangay Dome. 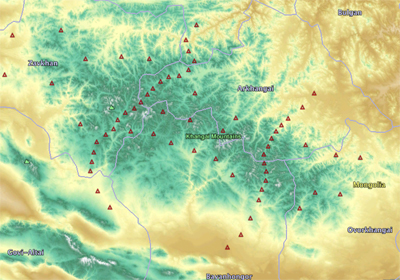 We are deploying a 64-station regional broadband array to determine crustal and upper mantle structure beneath the Hangay Dome. Two densely spaced linear arrays imbedded in a more broadly spaced regional array combines the power of densely spaced arrays for imaging with the advantage of 3-D coverage.

Data analysis will include: receiver-function analysis to determine depth to Moho, intra-crustal impedance contrasts, lateral variations in Vp/Vs and Poisson’s ratio, and crustal anisotropy; joint tomographic inversion for velocity and earthquake location providing an independent assessment of crustal and lithospheric mantle structure, Vp, Vs, Vp/V; and shear-wave splitting analysis to determine lateral variations in mantle strain, azimuthal variations in orientation of the fast-axis of polarization and delay time, and crustal anisotropy. 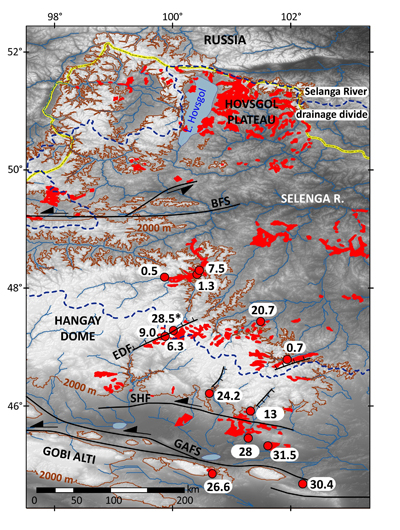 There is an abundance of basaltic lavas cropping out from the Gobi Altai across the Hangay dome northward into the Hovsgol Plateau. The basalt samples collected for geochronology will be analyzed for major and trace element composition. One of the main goals of this work will be to use the addition of Os isotope data to evaluate the degree to which crustal interaction may have modified the composition of these lavas. Although old metasomatized lithospheric mantle may overlap in Sr, Nd, Hf and Pb isotopic composition with old continental crust, the Re/Os ratio of peridotite is almost always dramatically lower than for any crustal rock, thus leading to very different Os isotopic compositions between mantle and crust. The basalts of Mongolia are quite enriched in incompatible trace elements, which makes their Sr, Nd, Hf and Pb isotope systems relatively insensitive monitors of crustal interaction. In contrast, most basaltic lavas have a relatively low Os content, which leads their Os isotope systematics to be sensitive to crustal overprinting.

Our goal in this part of the study is to determine how much of the elemental and Sr, Nd, Hf, and Pb isotope characteristics of these lavas have been modified by crustal interaction. Resolving this issue will provide a better definition of the isotopic characteristics of their mantle source that can then be compared with similar data obtained for mantle peridotites from the area. Resolving the crustal input into these magmas also potentially can provide clues to the nature of the lower and middle crust of this area. This is a particularly interesting question given that studies of Mongolian crustal xenoliths suggest that much of the lower crust in this area is either formed from recently underplated mafic magmas, or has been severely modified by interaction with young mafic magmas. 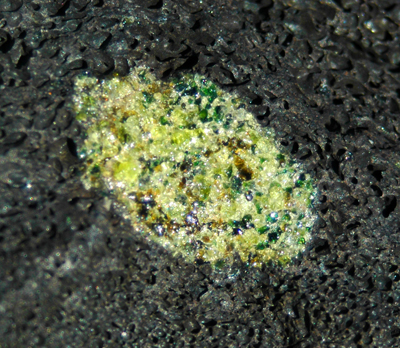 Mantle and crustal xenoliths are relatively abundant in some Mongolian basalt centers, and examination of these provides an excellent opportunity to understand the nature and evolution of the lithosphere beneath the Hangay Dome. The mantle xenoliths from Mongolia are spinel and garnet peridotites with generally fertile compositions (e.g. Mg#’s of around 0.89) with some evidence for both small amounts of melt extraction and melt addition (metasomatism). While some of these xenoliths have isotopic compositions that overlap those of the Cenozoic basalts (e.g. 87Sr/86Sr > 0.704), others have isotopic compositions closer to asthenospheric or MORB-like values (e.g. 87Sr/86Sr < 0.703). The other important feature revealed by the xenoliths is that they do not show unusually hot temperatures in the upper mantle of this area – at ~ 70 km depth the temperatures are ~ 1100°C. This conflicts with long- standing models suggesting that a deep-mantle plume is involved in either the uplift or volcanism and is, in general, counter to the expectation derived from the long history of volcanism in Mongolia.

Missing from the data for Mongolian mantle xenoliths are Re-Os isotope systematics. This system has proven particularly useful in defining the history of mantle sections beneath continents. Data for the Mongolian mantle xenoliths should be particularly useful in defining whether the mantle beneath this area is a section of fertile and young “asthenosphere”, or is instead older lithospheric mantle that has been severely overprinted by interaction with melts arising from a deeper source. Similarly, examination of lower crustal xenoliths can provide information relating to whether or not recent magmatic underplating has occurred, and in general on the degree to which the small volume of volcanism at the surface may reflect a greater degree of magmatic modification of the lower crust.