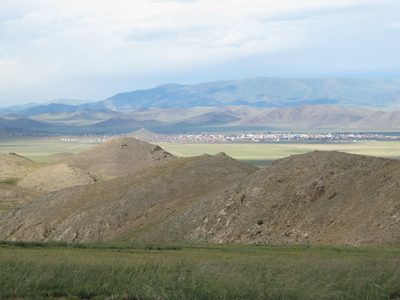 The plate-tectonic model predicts neither epeirogenic uplift and subsidence nor diffuse intracontinental deformation. With its focus on the lateral motion of lithospheric plates, plate tectonics effectively explains many first-order observations about Earth, such as the global distribution of earthquakes, volcanoes, and mountain belts, the relative heights and ages of continents and ocean basins, and mass transfer between the lithosphere and deeper mantle at subduction zones and rifts. Nevertheless, vertical motions are an important part of continental geology and explanations for these motions do not emerge from the standard plate model.

While the formation of continental lithosphere can be linked to subduction, mass transfer between the lithosphere and deeper mantle is not limited to subduction zones: asthenospheric upwelling, magmatic underplating, and delamination are significant within continental interiors. Ideas about many of these processes are not new but in recent decades with the support of observational data they have been gaining widespread recognition. In what could be viewed as a refinement to the plate-tectonic paradigm, the dynamics of oceans and continents can be viewed as part of a comprehensive framework wherein mantle convection and lithospheric dynamics operate as a single system reconciling the laterally dominated plate model with the vertical motions of epeirogeny.

Continental uplifts are important laboratories through which we can obtain significant constraints on the operation of this single dynamical system: high topography in continental interiors is an important signal that active mantle processes are in play. Moreover, epeirogenic uplifts are also significant in the way they engage other parts of the Earth system. They can divert atmospheric circulation, reorient major drainage networks and thus the redistribution of mass by erosion, and even alter evolutionary trends in the biota by changing local climate or by erecting barriers to migration.

Mongolia as a natural laboratry to study continental uplift 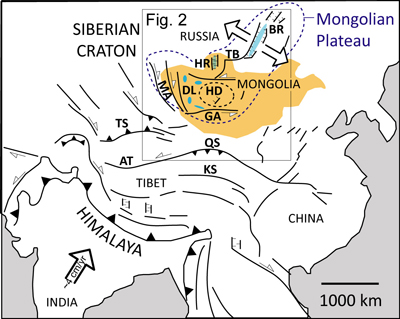 The Hangay in Mongolia occupy a broad domal upland (the Hangay Dome; ~200,000 km2) embedded in the greater Mongolian Plateau (~425,000 km2) of Central Asia. The high interior of the dome locally reaches elevations over 4000 m and contains high-elevation low-relief topography interpreted as an uplifted and well-preserved paleo-erosional surface. Global seismic tomography indicates a low-velocity zone in the upper mantle though the vertical and lateral extent of this low velocity zone is not well resolved. Basalt flows ranging in age from 30 my to the present contain mantle and crustal xenoliths. Geological and geomorphic evidence suggest uplift, faulting, and volcanism are fairly recent, although when and why these processes initiated or how they relate in space and time are poorly known.

Our research project is designed to document the geodynamics of vertical uplift located deep in the Asian continental interior. Our work focuses on characterizing the physical properties and structure of the lithosphere and sublithospheric mantle, and the timing, rate, and pattern of surface uplift. The presence in the Hangay Dome of an erosional surface cut into crystalline basement overlain by datable xenolith-bearing volcanic rocks provides an opportunity to integrate constraints from geomorphology, geochronology, thermochronology, paleoaltimetry, petrology, geochemistry, and seismology. Xenolith studies combined with observations from seismology are being used to determine the thermal state , structure, and composition of the lower crust and upper mantle. Paleo-elevation, geomorphic, and neotectonic studies allow us to quantify the timing and pattern of landscape evolution and development of topography. When integrated, these investigations provide the boundary conditions and data needed to test models for intracontinental epeirogeny in central Mongolia; they are also the kind of data needed to facilitate development of 4- D geodynamic models required for an integrated explanation of continental dynamics.